Over the long weekend, I took a trip with a few friends out to Seneca Rocks, WV. My friends are big rock climbers, so they spent all day on the rock face. I decided to use the time to take a step towards a long-term goal.

I’ve always wanted to go ski-camping. I have a really sweet pair of Alpine Touring (AT) skis, and I’ve used them to ski around a few resorts and state parks in my home state of Vermont. AT skis (also known as backcountry or Randonee skis) have bindings which allow the skier to switch between fixed-heel (downhill) and free-heel (telemark) modes. The fixed-heel mode operates almost exactly like a normal downhill ski, where the ski turns with the skier’s foot. The free-heel mode allows the skier to climb uphill using a normal, walking motion. When there’s any appreciable slope, most AT skiers attach skins to the bottom of the ski for uphill traction. Then, at the top of the slope, we remove the skins and fix our heels, then ski down. Here’s my dad holding my skis, with skins attached. 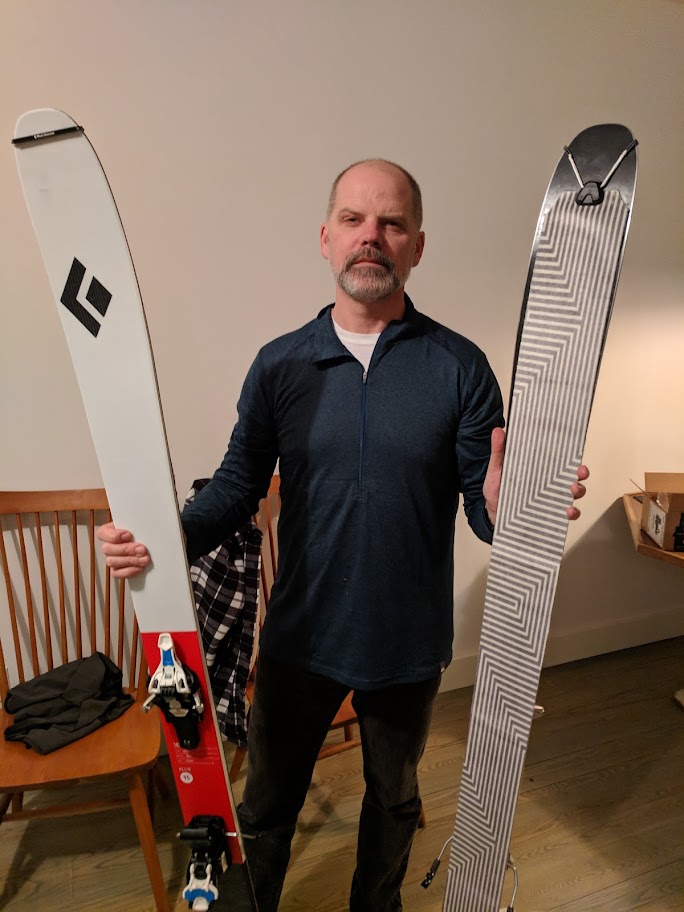 There are a lot of advantages to AT skiing. It’s a great workout, since it involves periods of intense hiking. It allows the skier to ski in areas inaccessible by liftline, which usually means you get fresh tracks. You can usually ski at resorts for free on off days, or early in the morning. It also just feels virtuous; you “earn your turns”. Here’s a great shot (taken by me) of my dad at the top of Sterling pond, an area only accessible via the backcountry. 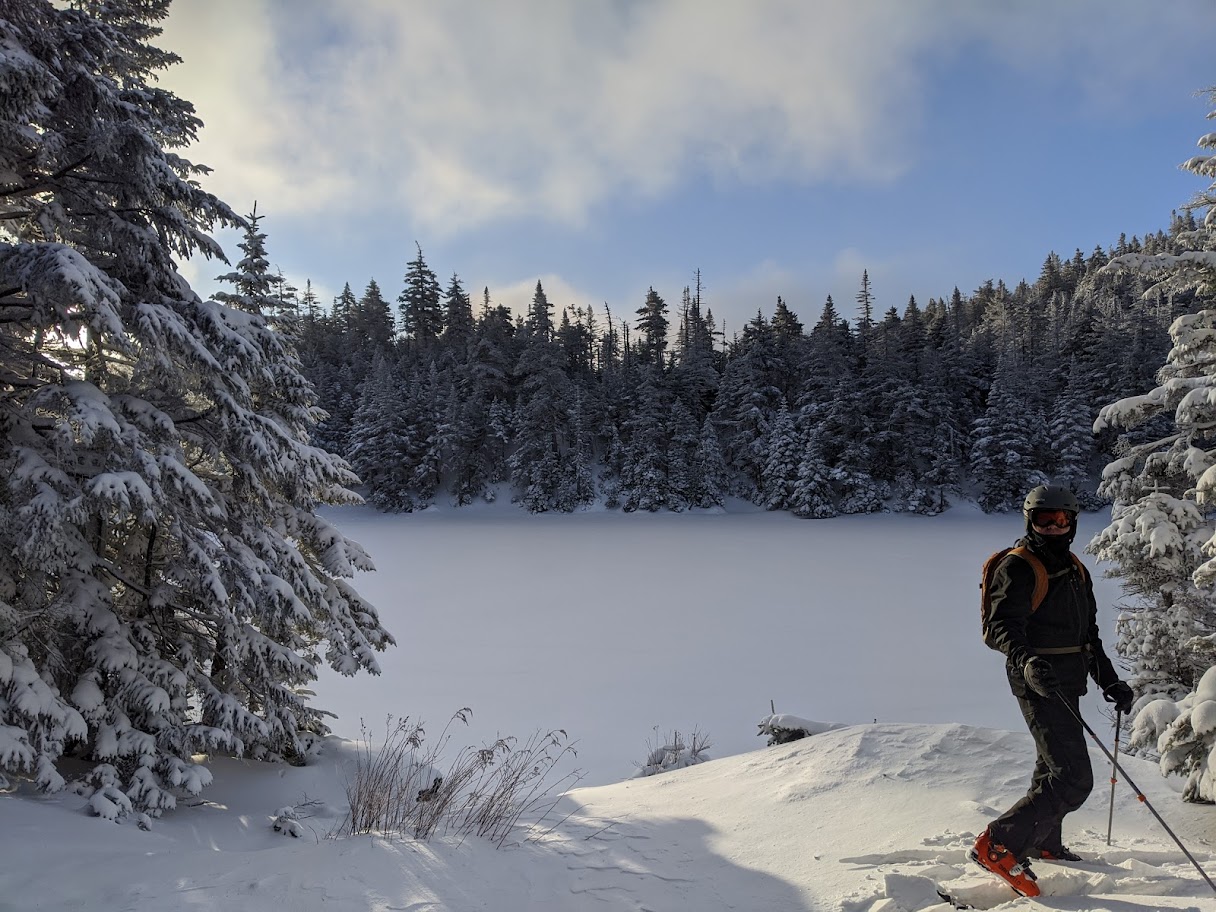 After a while, I started to go down the ski camping rabbit hole on youtube, and I’ve started scheming about how I can get ready for a multi-day trip. The problem is, I have never really backpacked before, or done any camping besides car camping. So this weekend at Seneca, I decided to bring all my gear, and hike with it.

To prepare, I read Allen & Mike’s Really Cool Backpackin’ Book, which I owned as a kid. It’s full of excellent advice, and really great cartoons. I also read Ultralight Backpackin’ Tips, which has a lot of great tips for reducing weight (and some psychotic ones, like cutting the strings off teabags).

I’ve been fantasizing about backpacking for a while, so I already had some of the stuff. The rest I bought from Steep and Cheap or REI. I went with a two-person four-season tent, which was not the best choice for weight, but I didn’t want to own two different tents, and I knew I needed one for the winter.

Here’s what I brought:

My “wet” pack weight (with water and food) was 27 lbs, which is honestly lighter than I thought it would be. It took a while to squeeze everything into the pack, but it worked out in the end. 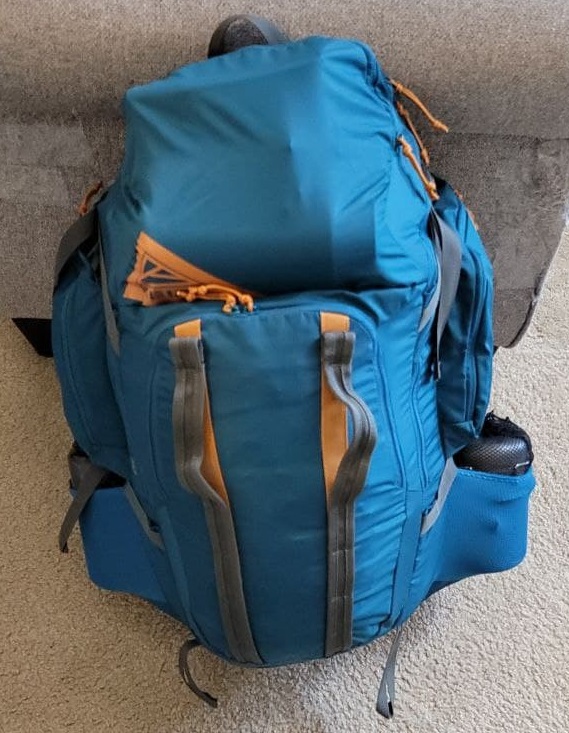 I did some planning beforehand. We would drive out on Friday and camp at Swallow Rock campground, which is a free, primitive campground near the head of the Swallow Rock Trail. In the morning, I would hike the Swallow Rock and Seneca Creek trails while my friends went to climb at the rocks. We would meet back up around the Swallow Rock trailhead and camp near there that evening. To make sure I wouldn’t get lost, I printed a map of the area and downloaded the entire state of West Virginia on Hiking Project, an awesome app similar to AllTrails (but totally free).

We drove out on Friday night, and ended up arriving in Seneca way past dark. Swallow Rock wasn’t really split into camp sites, but we found a nice secluded spot easily.

In the morning, I started hiking the Swallow Rock Trail. I took a picture of the map at the trailhead to keep track of where I was, and tried not to use my GPS, in an attempt to be more virtuous. 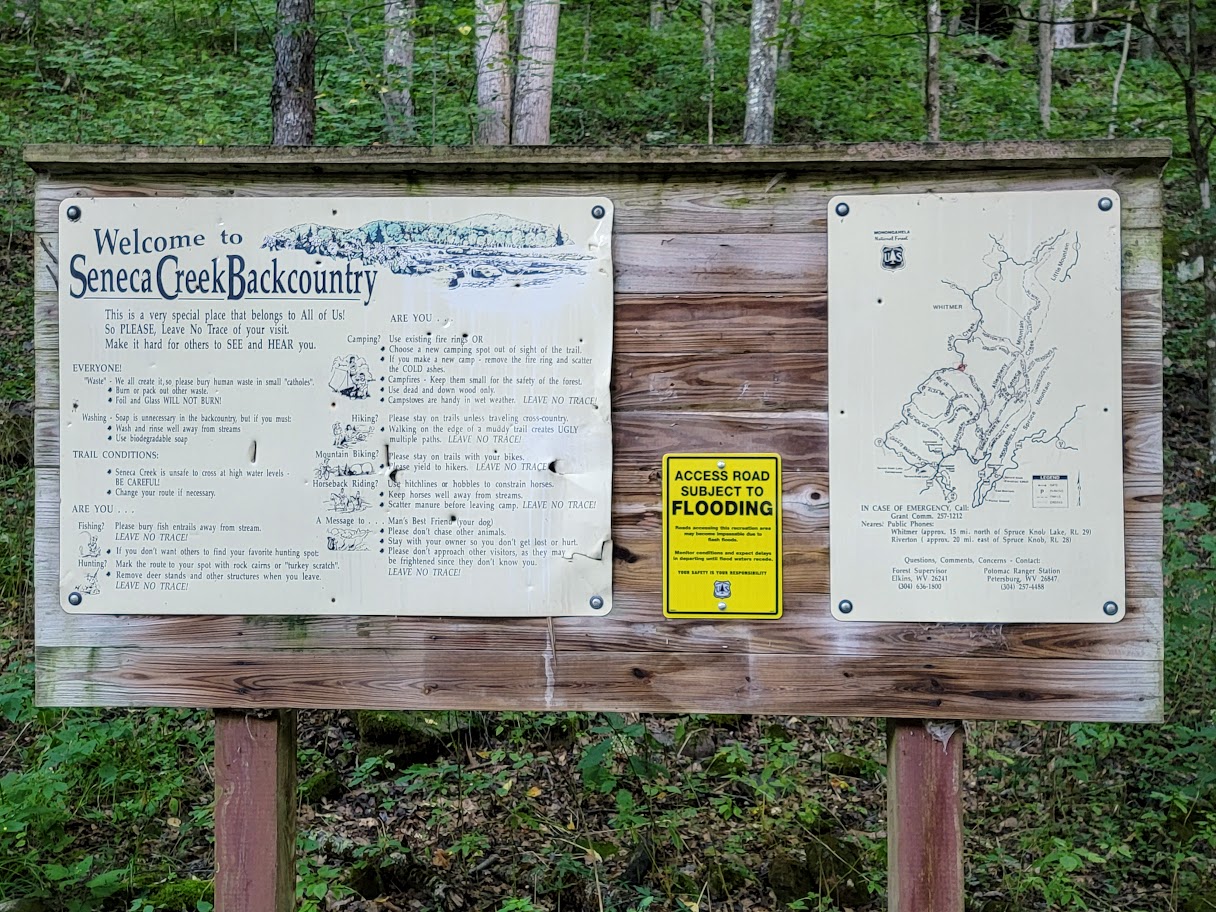 The Swallow Rock Trail was beautiful, and there were a few gorgeous spots along the way, especially where it intersected with the Allegheny Mountain Trail in a large clearing. 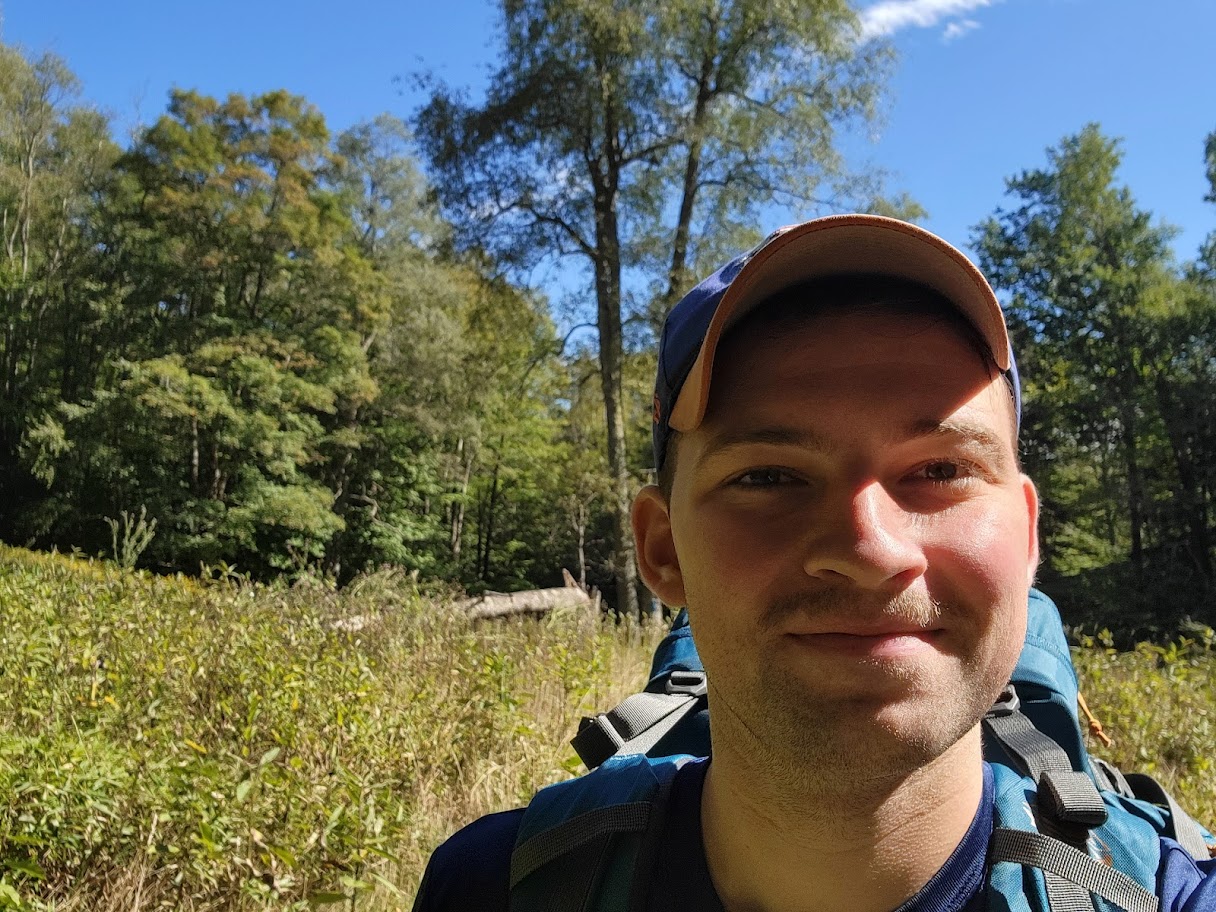 After getting to the end of the Swallow Rock Trail, I hiked North along the Seneca Creek trail, which had some gorgeous campsites and little waterfalls. 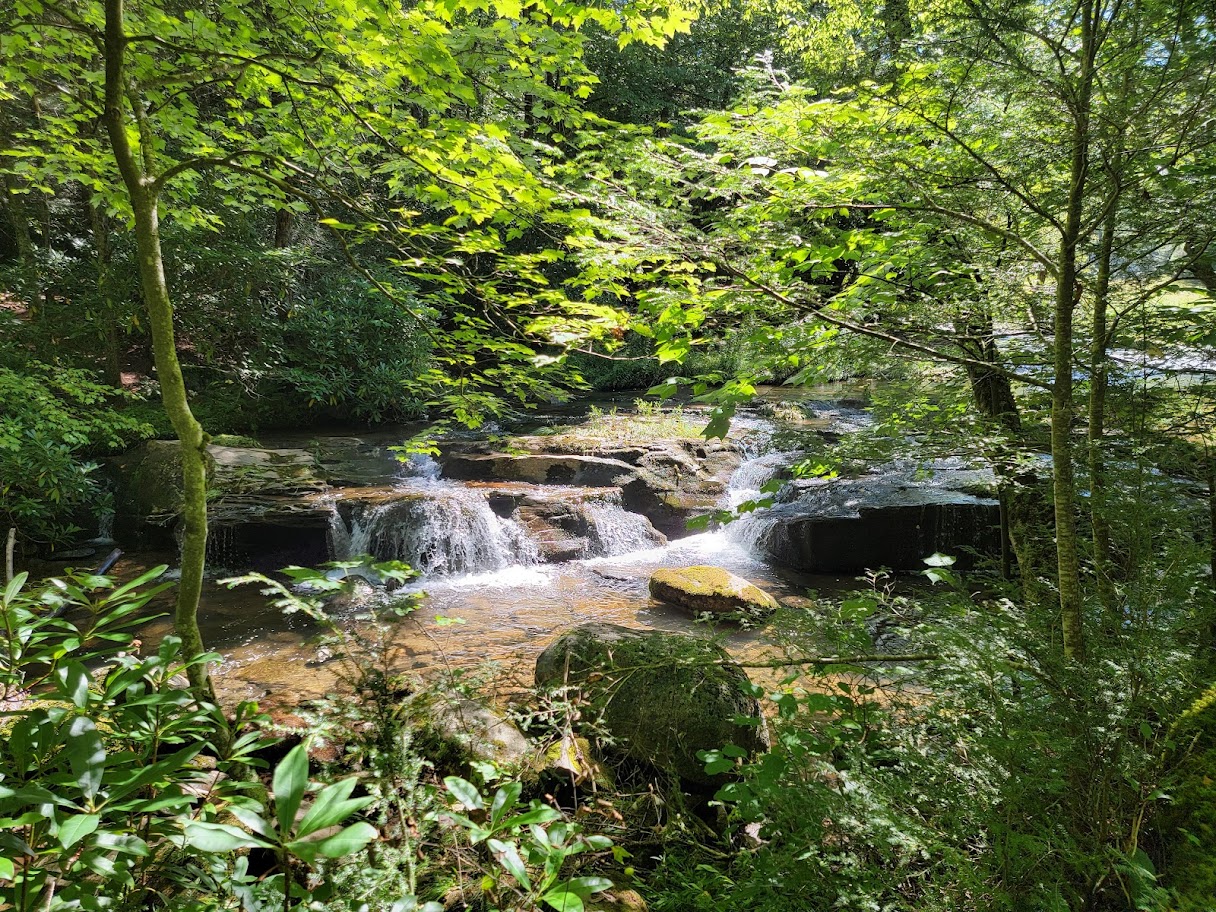 Then I looped around via the Bear Hunter Trail and Allegheny Mountain trail, until I was back at the clearing. I went a little farther so I could find a good place to eat a hot lunch. 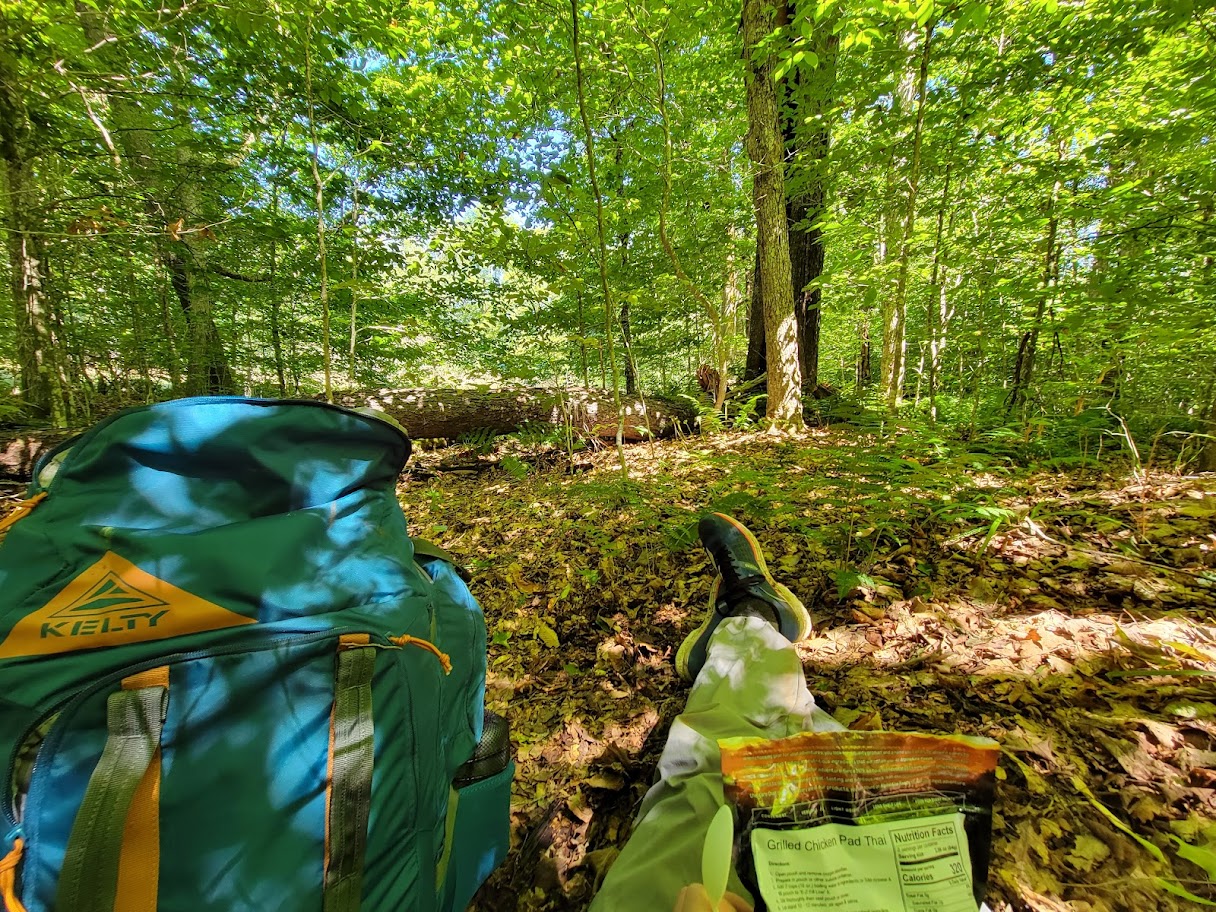 Then I hiked back to the trailhead to meet my friends. Strictly speaking, I could have left most of the stuff in my backpack with them, but I wanted to get a feel for what hiking with the pack was like. I was surprised at how easy it was. I have hiked with weight before, but this was a lot less and I barely noticed it, except on some of the more brutal uphills on the Bear Hunter trail. Of course, less weight would have been better. 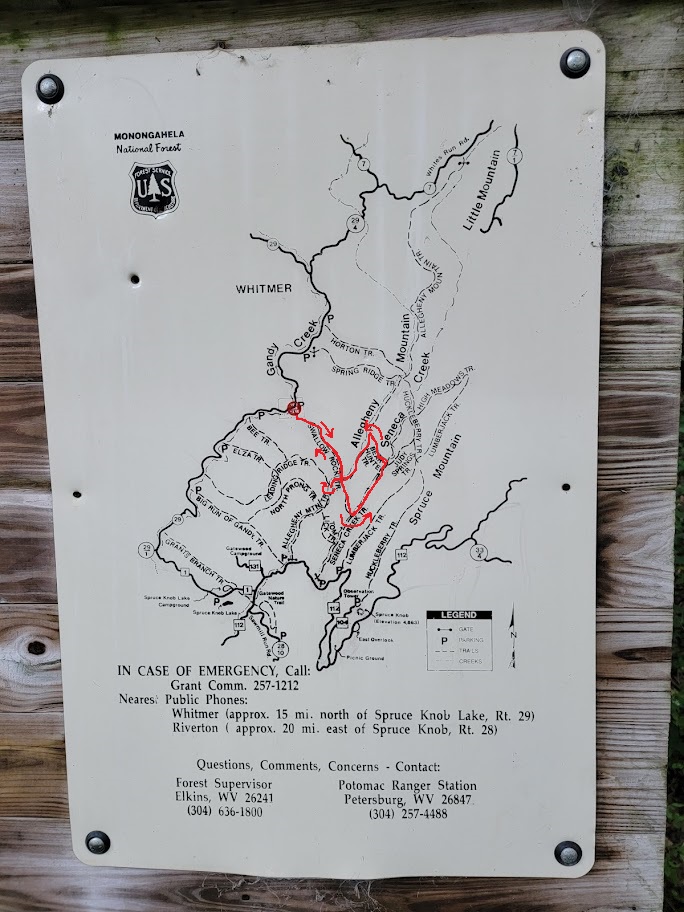 That night, we camped a little further down the road at Swallow Rock. We found a hidden spot by the creek itself. It was gorgeous, and no one bugged us. 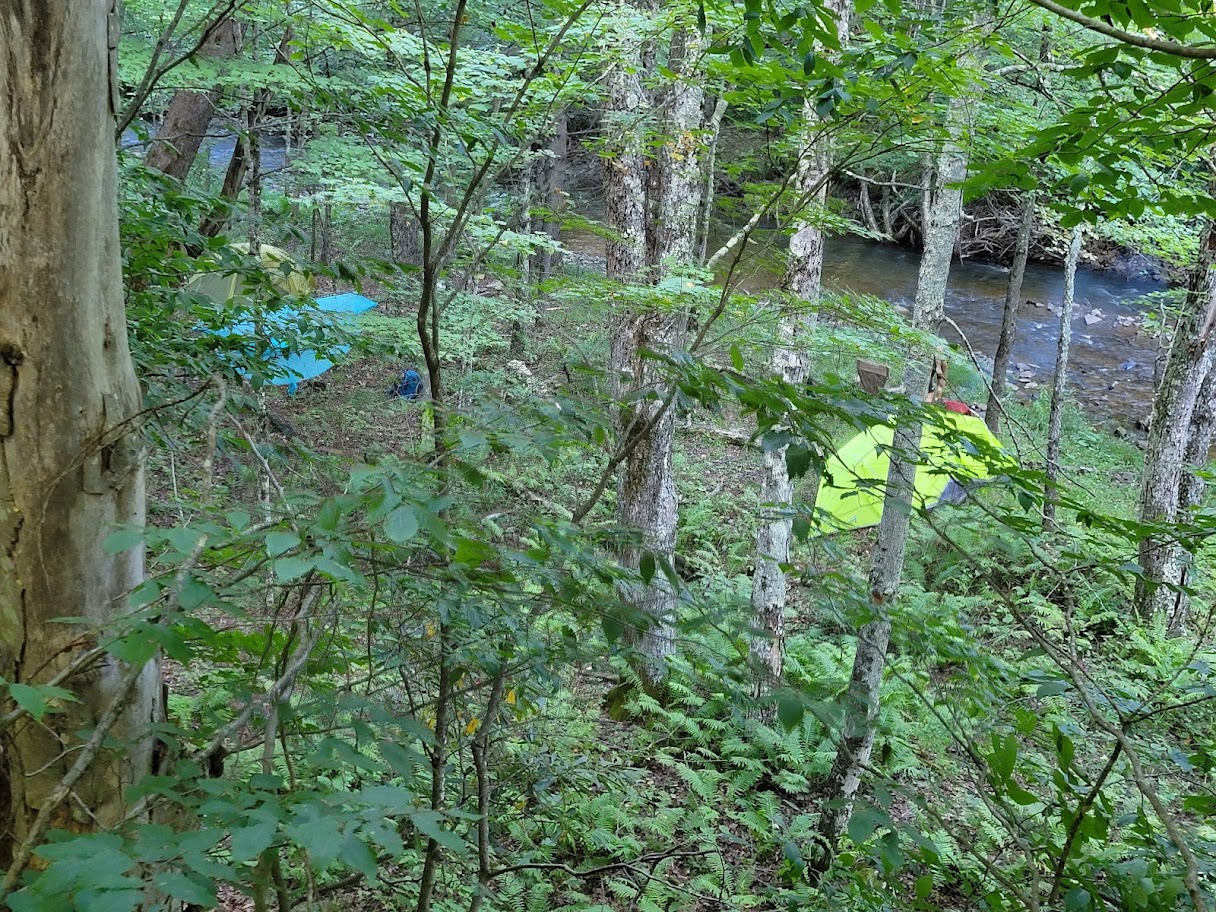 In the morning, we left in the car, and did a 5-mile hike at North Fork nearby. We also drove by the rocks so I could see them. 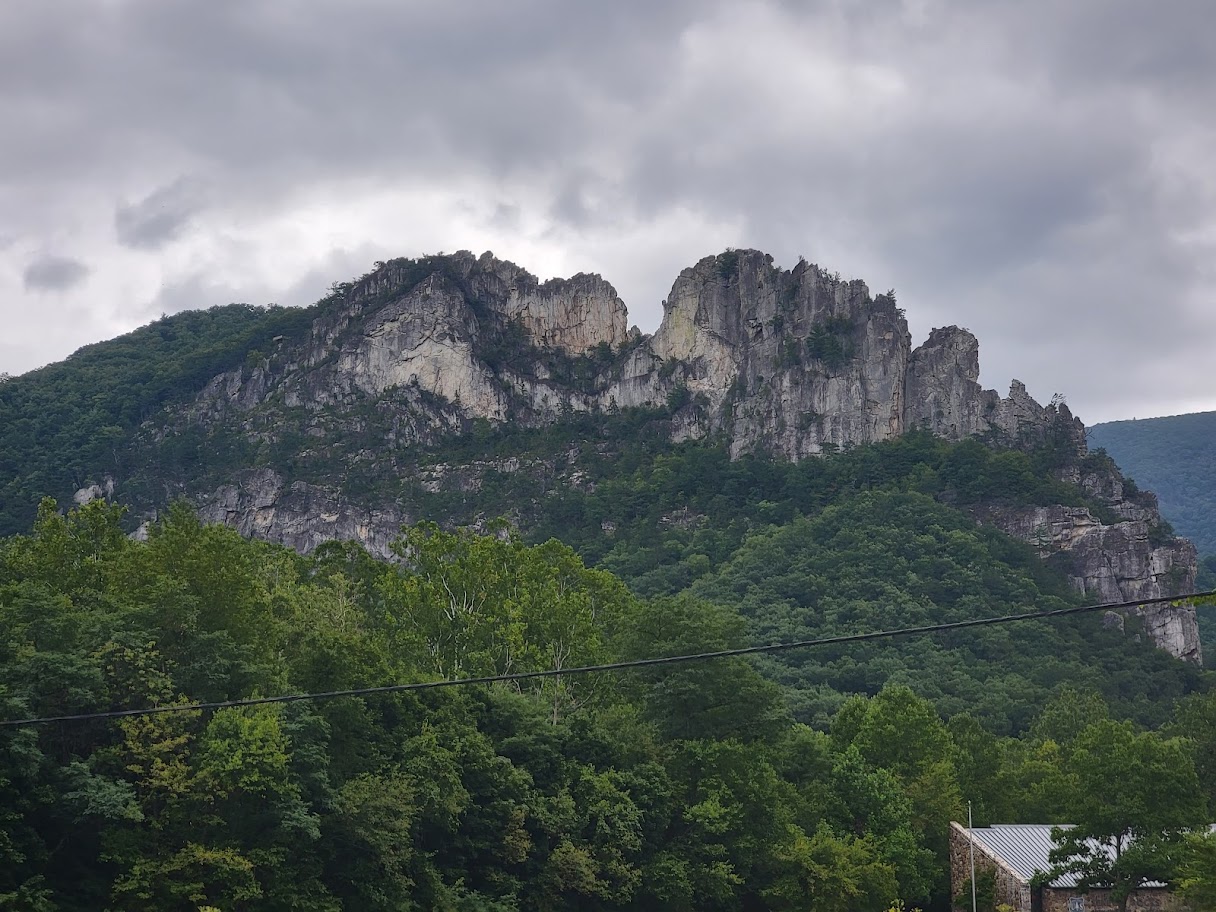 I did some things really well on this trip. Here are a few examples.

All of my clothes could be worn simultaneously. On the first morning, it was a lot colder than we expected, and I piled my change of clothes on over my normal ones. This was warm and weight-efficient.

I brought enough food. On the morning before I left camp, I ate a can of chili and tossed it in my buddy’s car. I had plenty of food for idle snacking along the trail, and never really was hungry, even after burning well over 3000 calories.

I was smart about water management. Every time I hit a fairly out-of-the-way stream, I filled up a water bottle and purified it with my iodine tablets. I had a good, two-bottle system, and I was religious about cleaning the threads.

Since this was my first time hiking with all my stuff, I didn’t expect to do everything perfectly. Here’s a few mistakes I made.

My sleeping bag was too big. I packed it without a stuff sack in my bag, and it still took up almost my whole main pocket. It was heavy, too, contributing at least 8 pounds. Since it was a synthetic, cold weather bag, it was way too huge for weight efficiency. After I got back, I bought a down replacement, which is about a quarter of the volume and weight.

I didn’t bring a rain jacket. This wasn’t really a big deal on my trip, because the weather was great, but it could have been a lot worse if it had rained.

I didn’t have a trowel or other digging tool, so when I dug a cathole I had to do it with a sharp stick. I bought a cheap plastic one when I got back.

Overall, it was a great trip. If you’re interested in the Seneca Backcountry, I would recommend going. Finding a camping spot is really easy, especially if you’re willing to hike a mile or two. When the weather gets a little colder, I’m going to go out again to prepare for the harsh realities of Vermont winter.